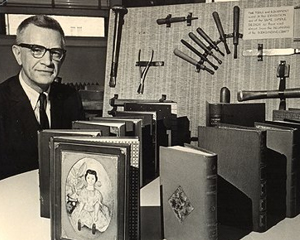 Founded in 1921, LBS is celebrating its 100-year anniversary. Reaching this milestone marks a century of family- and employee-owned innovation and leadership.

From a previously published article, here is how it all began...

"Ernst Hertzberg was born in Gramzow, Germany in 1853. On a hill outside Gramzow were the ruins of a monastery several hundred years old. Ernst played among the ruins and developed an interest in the old monastery. He asked enough questions to know that the monks who lived there were devoted to scribing and binding of church history. Excellent examples of their work existed in church archives in Gramzow. Ernst became interested in the structure and beauty of the book and the art of lettering and page illumination.

In Germany, students learned a trade at an early age. Ernst connected with a local bookbinder and for seven years was an apprentice book finisher. He probably started at the age of eight years. By the age of thirteen, Ernst was an accomplished book designer and finisher. Being around books and paper for most of his life he learned to appreciate fine printing, engraving, handmade paper, and books. It was obvious that he also had a love for the content and history that a book contained.

At age thirteen Ernst made a decision to leave Germany and move to Chicago, Illinois. He came to Chicago on his own and started a new life. His first job was working as a helper in a lumber yard. It wasn't long before he used his apprenticeship talents to get a job at Ringer Bookbindery as a finisher. He progressed rapidly with his talent for designing and finishing fine bindings. In the next four or five years Ernst met Charlotte, married and started a family of his own. He also became a partner in the Ringer Bindery, and it became known as the Ringer & Hertzberg Bindery.

Ernst and Charlotte had five sons and two daughters. As the years went on, all of their sons and daughters worked at the bookbinding trade. Under their father's teaching, most learned the skills and craftsmanship of the bookbinding art.

As Ernst built his business and his family, his interest in history and bookbinding began to take shape. He had a vision to create a bookbinding masterpiece by binding William Milligan Sloane's Life of Napoleon Bonaparte (New York: The Century Co., 1896) and adding original letters, portraits, engravings and photographs to the text. [See also Albert Perdue, Hertzberg's Napoleonana, in Books at Iowa.]

Ernst set up an area in his home to collect this Napoleonic memorabilia. He researched all of the dealers in the U.S. and Europe. At times he would purchase a book and only remove one page, a map or engraving. He would carefully place these pieces in the History of Napoleon Bonaparte. As he added each piece, he carefully inlaid it into hand-made high-quality paper and placed it within the text.

The collection of maps and engravings formed a complete illustrated literary history. They also form a complete history of the art of illustration from the time of Napoleon to 1904 when the volumes were finished. Included were hand colored coats-of-arms, steel engravings, woodcuts, lithographs, and photographs of revolutionary history.

Ernst had connections with collections and galleries all over Europe. Some portraits came from collections of the Empress Eugenia and others from a Gallery in Versailles. Some of the photographs were by Cowl -- those of Josephine and Napoleon.

As Ernst collected these pages he heard of the opportunity to exhibit his bindings and his set of books at the St. Louis World's Fair in 1904.

The set of Napoleonic books was his and not that of the bindery or Mr. Ringer. Ernst and his family designed and finished all ten volumes over a period of years. The volumes were finished in time to be exhibited in St. Louis. He asked a friend what value to place on the volumes and was told $10,000.

It was a proud moment for Ernst and his son, Ernie, who at fourteen years of age accompanied his father to the World's Fair. The books were the center of attention and won a gold medal for the finest example of bookbinding craftsmanship of the time. Many prominent European binders also exhibited and Ernst was pleased to have produced work of such high quality.

The books didn't sell at the fair but a few years later were purchased by Martha Wright Ranney of Iowa City, Iowa. Mrs. Ranney added the 10 volumes to an extensive rare book collection that she was building in memory of her husband, Dr. Mark Ranney, who had died in 1882. Mrs. Ranney worked with many bookbinders over a period of 15 or 20 years to build an important collection. She died in 1907 and left the collection to the University of Iowa.

Mrs. Ranney paid Ernst Hertzberg $12,000 for the ten volume set of Sloane's History of Napoleon Bonaparte. It is difficult to place a value on the set today, but it is irreplaceable and, in a sense, priceless. The set, plus all of the other books from Mrs. Ranney, forms an important place in the rare book collection of the University of Iowa.

After selling the set of books, Ernst bought out his partner, who wanted to retire, and was able to establish a new bindery. He called it the Monastery Hill Bindery. The bindery still exists today in Chicago with Ernst Hertzberg's great, great grandson, Blair Clark, as president.

Monastery Hill Bindery employed all of Ernst Hertzberg's family, plus a few sons-in-law. As all family businesses go, there had to be some conflict. After Ernst passed away his son, Edward, took over. Edward was a harsh leader and strict disciplinarian. To make a point to his son Lawrence, he hit him so hard on the back of the neck that it knocked him to the floor. Several of the brothers knew it was time to find other ways to work rather than stay in this growing family business.

Grover Hertzberg, who was 26 years old, was sent to Des Moines, Iowa to the Harris-Emery department store to display and sell leather bound books to the Des Moines market. During the display, Grover was approached by a group of librarians representing the State Library, public libraries, and other important library collections. They suggested that Grover start a branch of his bookbindery in Des Moines. The year was 1920 and Grover and brother Ernie were so excited by the idea that they built a new building in East Des Moines and were operating as a bindery in 1921. Both Grover and Ernie moved to Des Moines with their families. The bindery did very well and received contracts from the states surrounding Iowa. Unfortunately Grover died at the early age of 32 years. Ernie could not run the operation himself, so he asked if Fred James, Sr. and his son, Fred James, Jr. could come to Des Moines to help out.

Fred James moved his family to Des Moines in 1925 to join the Hertzberg Bindery of Des Moines. Ernie and Grover were given $12,000 each for their share of Monastery Hill Bindery, and they used this money to start the Des Moines operation. Fred James invested $15,000 when he joined the bindery.

Hertzberg Bindery of Des Moines had an idea of providing printed book covers for periodicals and children's books. They patented the concept and sold the license to bookbinderies in the U. S. for $1,000 each. These binderies used the covers to bind books for public libraries. As a result, Hertzberg Bindery incorporated a new company called Library Binding Service, Inc. The business went on during the depression of the late 30's and through the Second World War. After the war the Library Binding Service business grew, but the bindery did not profit.

The Hertzberg brothers got together and decided to form a new company called Hertzberg-New Method. They took the library binding portion of three binderies -- Monastery Hill Bindery, New Method Bindery, and Hertzberg Bindery of Des Moines -- and formed a new company in 1953. The company was located in Jacksonville, Illinois.

In 1995 the Hertzberg-New Method library bindery was sold to Heckman Bindery. A subsidiary of Hertzberg-New Method called Permabound Books still exists as a thriving re-binder of paperback books. In 2001 they were binding 30,000 to 40,000 books per day with annual sales of over 100 million dollars.

Library Binding Service also exists and has three divisions -- LBS Book Components with sales of materials directed at library and edition binders. LBS continues to print book covers for children's books and textbooks. LBS is one of the largest distributors and manufacturers of bookbinding materials in the U.S. Another division is Archival Products, which sells protective enclosures to colleges and universities throughout the U.S. Archival holds a patent for a pamphlet and music binder devised by Fritz James. A recent division of LBS is Corporate Image. This division prints and manufactures presentation materials for U.S. corporations. Corporate Image products include 3-ring binders, presentation binders, pocket folders, and audio and CD packaging. The three divisions employ 100 people and had annual 2001 sales of 20 million dollars. Great grandson, Fritz James, owns and runs the business. Recently Michael James, Fritz's son, joined the business as general manager of the Corporate Image division."
- biographical notes from the University of Iowa Libraries Collection

We welcome your comments. Please leave your ideas and opinions below.

The LBS family is made up of three companies – LBS, Corporate Image and Archival Products. All share a dedication for service and quality excellence within their own unique niche. Click on their logo to visit their website.
Copyright © 2022 LBS. All Rights Reserved.
Iowa Web design & development by Visionary Services